“Truth is orphans are alone, and you are not,” explains Father Sam Walker to Mike during the Suits season five summer finale that aired this past Wednesday. While watching the episode, this line triggered a realization about a commonality shared between Jessica, Harvey, and Mike; they all are abandoned children in their own right. This shared pain is subtly hinted at in the flashbacks seen throughout the episode. 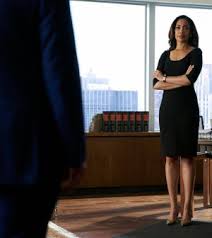 Gina Torres is given a moment to shine, as in the midst of defeat against Hardman’s hostile takeover she cracks into a fit of rage. She maintains her balance by holding onto her desk and then aggressively swipes everything away. Her inner turmoil is fully realized in this scene as the song Poison by Vaults plays in the background.  A queen struggling to retain her throne. Just, moments ago Louis informed Jessica, that their defeat to Hardman’s hostile takeover is inevitable. After five seasons, Louis and Jessica share an earned moment of honesty, “No matter what happens tomorrow. Person will always consider Litt her partner,” explains Jessica. “Partner”, a title ranked alongside son, brother, father, and even husband in her world. As we finally saw how Jessica’s marriage to Quinton ended, during her flashbacks.  Her husband knew that the title “partner”, would always supersede wife, no matter how much they cared for one another.  We see her past personal sacrifices for her career, while she risks losing her firm in the present.

“Sometimes we make choices, we are not old enough to make and then we regret them.” –Father Sam Walker

This season’s first episode is named Denial, as Harvey refuses to admit that his closest confidant, Donna, has left him to work for Louis.  The writers cleverly used a therapy plot device to initially unravel Harvey’s love for Donna, only to go beyond his inability to implicitly trust any woman in a romantic sense, and unveil the root of his problem…his mother.  Throughout the series the writers have built a slow burn in regards to Harvey’s family history.  This story arc cumulates to an epic boxing match, literally, between him and his father.  Punches are not the only thing thrown in the ring, as both men verbally spar, and Harvey voices his resentment towards his fath

er.  Harvey delivers the knockout punch and finally tells his father that his wife,  has been cheating on him for years.  “What has your mother being doing?” asks his father, “Bobby,”responds Harvey.  The guilt he has harbored for all these years as the one who, broke up his family, parallels his present remorse for bringing Mike Ross into the law firm.  The void left by his own mother is filled by Jessica, and in return Harvey recruits a fraud who could tear their household down.

“I know. I know you don’t believe in God. So let’s just call him… consequences.” -Father Sam Walter

Finally, in this episode a character, Father sam Walter, calls Mike out on on his inability to be accountable for his actions.  Since, I began watching the show, I have become frustrated with Mike’s character arc, because it’s constantly being recycle.  “Oh no, someone knows that I am a fraud, Harvey help, wha

t do you mean you can’t do anything, thanks for saving me…again.” Now this season as Mike and Rachel plan their upcoming nuptials their nativity to him being a fraud for a living, collapses around them.  Mike seeks guidance from Father Sam Walter, who looked over him in the wake of his parents death.  Patrick J Adams ups his performance in a great moment, as he lashes out towards Father Sam Walter, “They left me all alone!”, in response Father Sam Walker says, “And now

you’ve found someone who loves you, and if you stop being who you are, you’ll afraid she’ll abandon you too.” During the final moments of the episode Mike takes responsibility for his actions and resigns from Person-Specter-Litt.  He and Harvey share a moment as both accept that they are playing a zero sum game.

These abandoned children show how they need to have faith in their chosen family, in order to protect their firm…their home.  Throughout the episode Jessica accepts defeat, Harvey accepts his guilt, and Mike accepts his consequences.  Along with Mike’s resignation, Harvey submits his own resignation and sacrifices himself for Jessica.  This action allows Jessica to retain her position in the firm, but she must accept her loss of Harvey.  Unfortunately, for Mike his act of contrition comes too late, as he is hauled away by the feds, and charged with conspiracy to commit fraud at the end of the episode.  Will Jessica and Harvey come to Mike’s rescue? Will the firm go down with Mike?  Stay tuned.

Suits will return to USA on Wednesday nights in spring 2016, with the remaining six episodes.