The Walking Dead phenomenon continues as AMC premiered Fear the Walking Dead last Sunday night.  The first season is set to consist of six one hour long episodes that will build up to the season six premiere date of The Walking Dead, on October 11th, 2015.

Kim Dickens and Cliff Curtis play Madison Clark and Travis Manawa respectively; the heads of a blended Los Angeles family.  The first episode is a slow burn into an apocalyptic world, through the lens of an already dysfunctional family.  Madison Clark is the mother to Nick, an early twenty something year old drug addict, and Alicia “the perfect child” who wants nothing more but to leave.  “I don’t want to be crazy,” explains Nick to Travis, while in the hospital.   The first scene introduces us to Nick waking up in a drug den and encountering a walker for the very first time.  Since, he is a drug addict the writers use his unreliability to make both Madison and Travis hesitate in believing Nick.  Throughout the rest of the episode both characters begin to n

otice more oddities in the world around them.  For example Madison stares out the window on the way home and sees what appears to be a homeless man standing on the outskirts of a playground filled with children.  The longer she stares, the more peculiar the scene becomes.  Madison, Travis, and Nick all begin to truly believe in the final scene of the first episode, as Nick makes the first walker kill in self defense.  Frank Dillane brings Nick’s fear to life as he desperately cries out to his mother to back away from the walker.  Now that Travis and Madison believe that the threat is real, the following episode is an attempt to run away, together, as one complete blended family. 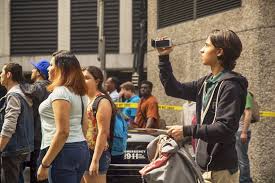 “Things will fall apart now. No satellites, no internet, no cell phones. Communications will fail because no one’s there to manage the servers. The electrical grid will collapse for the same reason. It’s all gonna go to hell, and that’s what they don’t get. When civilization ends, it ends fast.”-Tobias (episode 2)

After Nick discovers the walker in the first episode, he runs out into the middle of the busy Los Angeles highway screaming.  His fear is cut off by the abrupt, harsh, eclectic sounds of every day life.  In contrast episode two begins with two slow motion shots, the worl

d feels and sounds a lot quieter, which in turn adds tension on screen. Madison has another moment while looking out the car window as she sees two children in the back seat of a car passing by.  Both kids are wearing breathing masks with monster smiles drawn on them.  The situation’s horror combined with our innate inability to comprehend such a reality is clearly drawn throughout the second episode.

In a great sequence, referential to the LA riots, Travis’ son finds himself in the midst of a protest against the police.  As, chaos erupts around them Travis, Liza, and Chris find shelter with a mexican shop keeper an

d his family.  They peek out the storefront’s boarded windows as if they are caged animals.  Meanwhile Alicia and Madison witness their neighbors kill one another across the street, both unable to do anything.   As much as the first episode established Madison and Travis as a united front, the second one split them further apart.  Now stuck in different parts of LA, it would seem that the next four episodes would revolve around Travis’ family making his way back to Madison and her family.

Do not be afraid to watch Fear the Walking Dead, because at the very least we are not in Georgia anymore.