“You’re a zombie well, you’ve been a zombie since that night at the lake.  Instead of telling me the truth you decided that it would be easier to break my heart.” -Major Lilywhite (1×13) 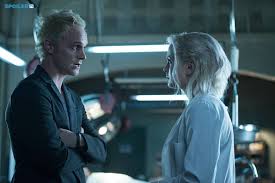 “You couldn’t ask that of me, but you turned me into a zombie without my permission.”-Major Lilywhite (1×13)

Blaine DeBeers is also a zombie…the one who turned Liv, along with a bunch of others.  During the first season co-showrunners Diane Ruggiero and Rob Thomas, masterfully retain the relevance of Major Lilywhite’s storyline in the show, while leaving him in the dark about Liv. They carefully allow him to act as the hero in this story as he discovers Blaine’s entire operation, from the “brains” running, to the turing of the city’s most wealthy and influential citizens into zombies.  Too bad Major Lilywhite is no match for Blaine, on his own, and winds up in a freezer for the majority of the finale.  Liv comes to the rescue where she finds herself for the second time, with the opportunity to kill Blaine once and for all.  If she kills him then what happens to all of th

e zombies that he has created?  Yes, Blaine creates the demand for brains, but he is also the supplier too.

Liv decides to just shot Blaine, not kill him.  Only to the discover Major slowly bleeding out in the freezer, after Blaine shot him just moments before.  In a fit of rage, Liv uses one dose of the cure on Blaine.  Then selfishly scratches Major Lilywhite in an attempt to turn him into a zombie, instead of losing him forever. Ironically in the previous episode the writers began to set up a storyline of having Liv’s little brother work for Blaine.  We see her brother arrive for work the next day, only to have the shop blowup, with him standing right outside the front door.

“It’s not what fate dealt me…You did, the same person who let me check myself into a mental hospital…who let me think I was crazy.” –Major Lilywhite (1×13)

The finale ends with Liv standing outside of the intensive care unit, as she watches her brother go into cardiac arrest.  The screen dissolves to black after Liv says, “No,” in response to her mother’s pleas for Liv to save her brother.  Overall episode thirteen was the best episode in the first season, as the writers ended the Liv versus Blaine storyline.  While allowing Major Lilywhite and Liv to have the first honest conversation about their relationship all season. The same one being quoted throughout this entire post.  This scene echoes the theme of “avoidance” that can be found in most shows dealing with supernatural creatures.  Liv was turned into a zombie, and in turn avoided death.  After someone finds a way around the finality of death, then their first instinct when confronting it again, is to avoid it…or prevent others from experiencing it as well.  Later, in an act of penance Liv gives Major Lilywhite the second dose of the cure.

When you had a chance to play God and decide wether I die, or became this…Did you decide based on what you wanted, or what you thought I wanted?” -Major Lilywhite (1×13)

iZombie season two will premiere on the CW network on October 6th.  Liv, Clive, and Ravi will continue to work together solving various homicides. Viewers will learn through both Major Lilywhite and Blaine about the side effects of the cure.  I am particularly interested in watching how Blaine re-adapts to the

world without his power as a zombie.  Will Major Lilywhite ever make peace with Liv? Will Peyton not only forgive Liv, but Ravi too from keeping the secret from her? Hopefully the writers creativity will seep down from the over-arching story lines and into the case storyline found in each episode.  If you missed season one do not be dissuaded into just starting with season two…as things are just getting interesting here in this zombie land.