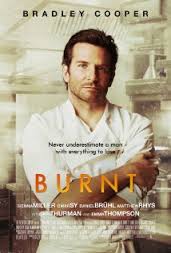 Burnt
“Maybe I just wanted it really badly, that when I got it, I didn’t know how to hold on to it…” –Adam Jones 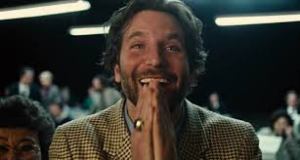 Cooper has been nominated for an Academy Award for the past three years and in 2015 he may receive his fourth nomination. If not, for Burnt, then maybe for his performance alongside Jennifer Lawrence in David O. Russell’s latest film titled Joy. The film chronicles Joy’s (Lawrence) rise to become the founder and matriarch of a business dynasty. Cooper plays an executive at the home shopping network who helps Joy sell her products.  At least, this year, Cooper has doubled his chances to receive his fourth consecutive nomination. Burnt will hit theaters on October 23rd, 2015, while Joy is set to be released on December 25th, 2015.

Legend
“Me and my brother, we’re going to rule London.” –Ronnie Kray 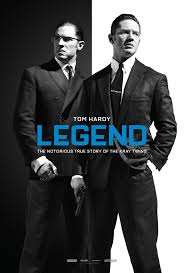 Director Brian Helegland depicts the glamorous, but at times ultra violent London underground scene in the 1960s. Tom Hardy stars as two of the most notorious criminals in British history, identical twins Reggie and Ronnie Kray.   Yes, we get twice the Tom Hardy for the price of one admission ticket. Emily Browning (Sucker Punch) co-stars as Reggie Kray’s wife, Frances “Frankie” Shea, and narrates the entire film.   The love affair between Frankie and Reggie is used as a device to contrast the twins from one another. Audience members should sympathize with Reggie as he deals with his brother’s insanity, even though by doing so the film treads more towards fiction than fact.

Based on the trailer, the movie seems to reference American gangster films such as Goodfellas and Mean Streets, under the guise of a cockney accent. In addition the film possesses a quirky, offbeat, dark comedy tonal feel as seen in the cult-classic Snatch. Now the real question is if Tom Hardy will receive critical acclaim and recognition for both roles come award season. We have seen him as the charming, gentleman, con-artist Eames in Inception; and recently as the psychotic, offbeat, Jewish gangster, Alfie Solomons, on Netflix’s Peaky Blinders season two. Now we are able to see him play both character types simultaneously, with the cockney accents, this could be legendary.

In limited release on November 20th, 2015
To watch the trailer click here

The Revenant
“I aign’t afraid to die anymore…I done it already.” –Hugh Glass

Revenant refers to someone who has returned from the dead. Hugh Glass (Leonardo Dicaprio) is a 19th century frontiersman; left for dead, by fellow hunters and fur trappers, after a brutal bear attack. Just, when we thought we had seen Leonardo Dicaprio play everything, he brings us his portrayal as Hugh Glass; a fighter, survivor, but most importantly a quieter man in comparison to Dicaprio’s previous roles. The film follows Glass’ three hundred mile trek for vengeance across Perkins County (now South Dakota). Throughout his journey Glass deals with the grief of being betrayed by his best friend, John Fitzgerald (Tom Hardy). Glass’ thirst for revenge fuels his will to survive against all odds.

The is Academy Award winning director Alejandro G. Inarritu’s follow up to last

year’s best picture winner, Birdman. Inarritu’s determination to truly capture the harsh reality of Glass’ survival story, lead his cast and crew to some of the most remote places to shoot in the Canadian interior. In the trailer we begin to understand Inarritu’s vision to tell an epic adventure story through the perspective of one man’s isolation. There is a magnetic mixture between quiet tension and abrupt action in the trailer. I don’t want to jinx it, but I really hope that all Leo needed to do was return from the dead, to finally receive an oscar.

In theaters on December 25th, 2015
To watch the trailer click here