Send comments or questions to SceneNNerd@gmail.com to have them read on the show! On today’s show Pete, Sarah and Matt welcome back Amy and Lauren from The Flash Podcast and Assembly of Geeks and Jon G from Friday Night Fandom. Pete makes HUGE announcement then runs down what’s new in theaters and on Blu ray. Lauren does her best Casey impression for the “Entertainment Whatever” and the gang tackles RETURNING fall shows. It’s crazy, a bit laggy, but still somewhat entertaining. It’s Scene N Nerd!

Have you been watching Mr Robot?
Are you lost in show runner, Sam Esmail’s “perfect maze”?
Now you have a choice to make.

Don’t finish reading this post and the story ends here, or see how far down this rabbit hole goes.

Beneath this simplistic idea, lies Elliott Alderson’s complex narrative in the midst of his disillusionment with reality.  At the end of episode nine, Elliott stands alongside former EvilCorp Vice CTO, Tyrell Wellick, in the fsociety arcade as Maxence Cryin’s piano cover of Where Is My Mind plays in the background.  The screen fades to black as a few corn kernels burst into popcorn.  The entire scene is referential to the David Fincher film, Fight Club.  During the movie’s ending the narrator and Marla Singer character watch bombs go off along the city skyline; they hold hands as the world around them collapses.  This ending follows the reveal that Tyler Durden was the narrator all along.  In comparison the ending of episode nine concludes the complete dismantling of both Elliott Alderson’s and Tyrell Wellick’s lives…the collapse of their “perfect mazes”.

“I want you to be where you belong.  Here with me.”

Elliott works alongside the fsociety hacker crew to take down EvilCorp.  They decide to set up EvilCorp CTO, Terrence Colby as their scapegoat for a hack into EvilCorp’s financial records. Elliott’s hand in creating this vacancy in EvilCorp sets off a series of events that lead both men to standing together in a run down arcade on Coney Island.  In contrast to them standing face to face in a boardroom on the top floor of a New York City skyscraper, during episode one’s ending scene and episode two’s closing scene.

“The un-wrinkelage in the otherwise neat reality, I’ve created over the years.  I’ll never let myself slip again.”-Elliott Alderson (1×03)

pisode opens with the ambitious Tyrell Wellick practicing his pitch to be promoted to Evil-Corp’s CTO in front of a mirror.  Again, sharp cuts are shown to overlap, one another, as Tyrell attempts to debug his self-presentation.  The whole sequence presents him as a man obediently, abiding by the rules of society.  His appearance of normalcy, beneath the guise of perfection, authorizes him to be viewed as a successful man in this reality.  Meanwhile, Elliott attempts to adhere to the same ideology. Unfortunately, for both characters their “wrinkels” re-emerge and force them to retreat back to their own realities.  This episode opens with harsh spurts of techno music as we view a look into Tyrell’s cold, disconnected world.  The episode ends with classical music playing as Elliott returns to the underground, 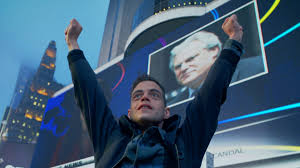 In the following episode Tyrell Wellick appears in Elliott’s apartment, siting at his desk, holding a key, as part of a dream sequence.  The two characters make eye contact with one another, but don’t speak.  Instead Elliott’s pet fish starts talking about his life being stuck in a glass bowl.  Episode four is named da3m0ns.mp4, is this appearance of Wellick foreshadowing to a future rivalry in a later season? Remember, Tyrell appears to be holding the key referring to Mr Robot’s line indicatin

g that Elliott is “the key to everything,” said earlier on in the episode.  Maybe, a partnership is more on the horizon as we head into season two.

Consider the idea that we only associate Tyrell as being the villain, because EvilCorp is presented as our hero’s villain.  Tyrell is truly the first face we can distinguish from the crowd of EvilCorp businessmen on the show.  Now throughout episodes six, seven, and eight Elliott and Tyrell don’t share any screen time together.  Instead, we watch Tyrell Wellick and his wife, Joanna, attempts to take down Scott and Sharon Knowls; in order for Tyrell to assume his rightful place as EvilCorp CTO.  “Tyrell.  I want you to accept a hard truth. Right here, right now, in front of me.  You are not going to be CTO.  I want to see that look wash over your face.  It’s the only way I know you’ll stop playing these silly, silly games,” explains Scott Knowls in episode six.  While, Tyrell wages war in the business world; Elliott plays hero to protect Shayla from the violent criminal, Fernando Vera.  After his victory at Steal Mountain, Elliott returns to his apart 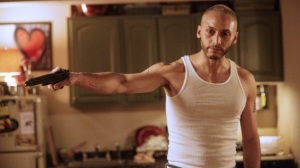 ment at the end of episode five to find that Vera has taken Shayla.  Then he uses Shayla’s life as leverage against Elliott in an attempt to break out of prison.  In a heartbreaking reveal, Elliott discovers Shayla’s lifeless body in the trunk of a car.  Fast-forward to Elliott’s riveting breakdown scene with  his therapist, Krista, at the end of episode seven.  Tyrell Wellick did not kill Shayla, Fernando Vera did.  On the other hand, Tyrell’s true 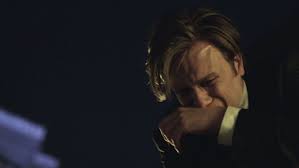 evil nature is seen as he kills Sharon Knowls on a rooftop during episode seven.  In response to his actions he too breakdown into tears upon his failure to keep his hands “clean”.  Elliott couldn’t keep his hands clean either.

Are you lost in the maze?
Did you hit a dead end?
Don’t worry, we are close to the source code. 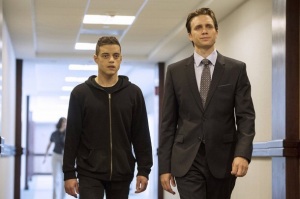 Are you the hero, or are you the villain?  Can you be the hero in our own story, but the villain in someone else’s?  Elliott is the automatic hero in this story, because he is the narrator, even our creator; remember we are his imaginary friends.  He often breaks the fourth wall to talk to us and then accuses us of being co-conspirators in various attempts to destroy his reality.  Our implicit trust with Elliott is broken during the ending sequence of episode eight as multiple truths are revealed.  His fsociety hacker friend Darlene, is actually his sister, and the supposed leader of their group, Mr Robot, is his deceased father.  I encourage fans of the sh

ow to re-watch all of the scenes between Mr Robot and Elliott, pay close attention to the staging of the actors. They are constantly mirroring one another throughout; note that this episode eight is called M1rrOr1ng.qt. Reflecting one another, as a visual representation for their present relationship, as Mr Robot is a figure of Elliott’s imagination.

Throughout episode nine Elliott attempts to reconcile his disillusionment of the reality that he has constructed for himself.  Simultaneously, a very similar collapse of reality is taking place in Tyrell’s world.  After murdering, Sharon Knowls, he has been running from the police, fired from EvilCorp, become a father, and then abandoned by his new family.  This leads to a face-to-face confronta

tion between Elliott and Tyrell.  One wants to change the world, while the other wants to rule it.  During this first installment of Mr Robot neither character is able to become who they aspire to be in society…yet.

Want to be on the show?? Tweet @SceneNNerd or shoot us an email at SceneNNerd@gmail.com! On this week’s show, Pete and Casey are joined by Amy to discuss Game Of Thrones, Arrow, The Flash, and Legends of Tomorrow. Pete lets us know what’s coming out on Blu Ray, DVD, and in theaters. Casey makes up the entertainment news on the spot. Amy speaks the truth and speaks it fast. Andy may or may not crash the show. There is also a baby. One more awkward pause than you’re probably used to……. It’s Scene ‘N Nerd!